The Inflation Saga Continues (And Past Tips From Our Experts)

This morning, the Bureau of Labor Statistics reported that the Consumer Price Index (CPI) for all items rose by 0.4% in September, compared to the 0.3% expected.

Compared to a year ago, prices are 5.3% higher – the highest rate of increase since January 1991.

As you can probably guess, there are a few “problem” areas that are contributing to rising prices. I’m including a screenshot of the breakdown, so you can see the impact that things like food, energy, and used cars are having on the overall CPI: 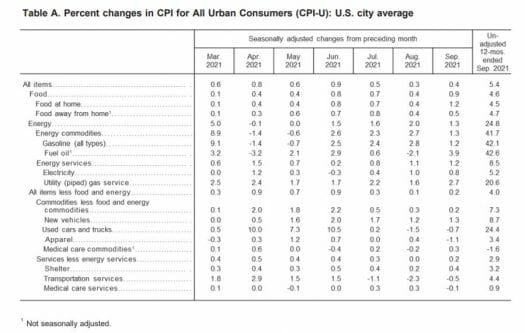 “Food and energy are more variable, but that’s where the problem is,” said Bob Doll, chief investment officer at Crossmark Global Investments. “Hopefully, we start solving our supply shortage problem. But when the dust settles, inflation is not going back to zero to 2 [percent] where it was for the last decade.”

Used car prices, which have been at the center of much of the inflation pressures in recent months, fell 0.7% for the month, pulling the 12-month increase down to 24.4%. However, the continued rise in prices even with the drop in vehicle costs could lend credence to the notion that inflation is more persistent than policymakers think.

So no, you’re not imagining this. Inflation is here, and it’s bearing out in the numbers – even of those numbers are uneven. Experts and policymakers alike are beginning to acknowledge it.

Heck, even Uncle Sam is giving the biggest COLA adjustment to Social Security in 39 years to retirees.

As the Associated Press reports:

Millions of retirees on Social Security will get a 5.9% boost in benefits for 2022. The biggest cost-of-living adjustment in 39 years follows a burst in inflation as the economy struggles to shake off the drag of the coronavirus pandemic.

The COLA, as it’s commonly called, amounts to an added $92 a month for the average retired worker, according to estimates Wednesday from the Social Security Administration. It’s an abrupt break from a long lull in inflation that saw cost-of-living adjustments averaging just 1.65% a year over the past 10 years.

If you’ve been following along, then you know that our expert analysts have been talking about inflation since the spring. My goal today isn’t necessarily to bring up anything new, but rather to direct you back to what they were talking about back then — because a lot of their advice still applies right now.

Back in May, my colleague Jimmy Butts said that it was “time to start talking” about inflation — and how to beat it. He also offered three simple tips in this piece.

Later that month, my colleague Nathan Slaughter talked about its damaging effects. He also talked about how investors should focus on earning more income right now, in order to fight it.

As I mentioned a couple of weeks ago, Nathan was one of the first to sound the alarm bells on inflation. For months, he’s been saying that the inflationary signs we’ve been seeing are more than “transitory”. He also correctly forecasted the supply chain disruptions that we’re seeing now, and that shipping companies would see record demand (and charter rates) once the world opened for business.

And as good of news as more money for retirees is, as Nathan always points out to his readers, you’re going to need more. With this latest increase, average Social Security payment for a retiree will be $1,657 a month, starting next year. For a couple, it’ll come out to about $2,753 per month.

For most of us, that’s not going to cut it. That’s why Nathan has put together a special report, full of “bulletproof” dividend payers that can be relied on in any market, year after year.

These securities have a well-documented history of rewarding investors with higher payouts every year. And thanks to that, you’ll worry less about inflation, Social Security, or the day-to-day volatility of the market. Go here now to learn more.